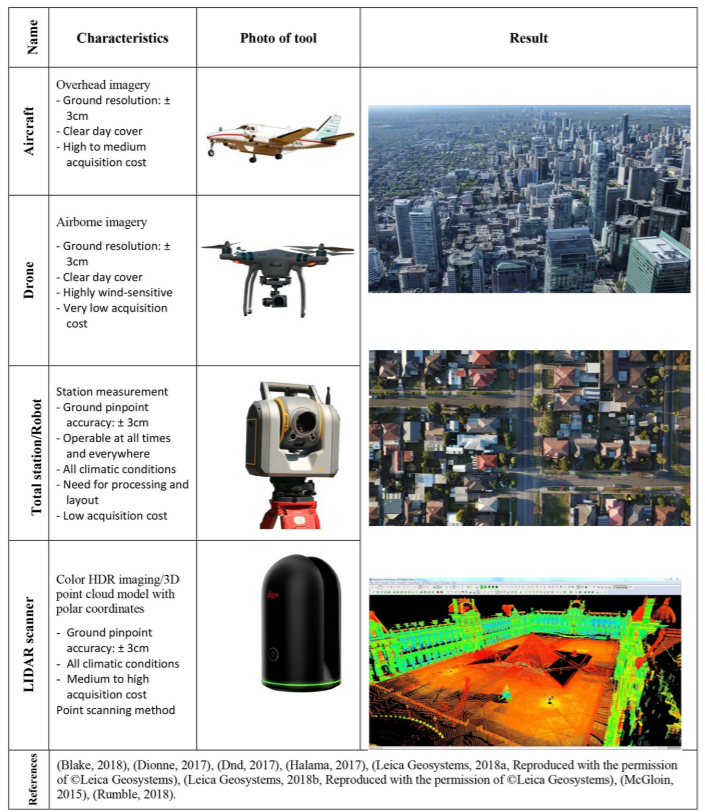 Towards the creation of a searchable 3D smart city model

The research paper aimed to create a new searchable 3D city model to help managers improve their decision-making. They identified data management basics and the key elements used in the new model design, analyzed five-city models and presented its findings and proposes analytical trends for the new model. They found that City systems can be interconnected, thanks to data digitization and the integration of new technologies into different management processes. They have found that none of the 3D city models identified in this research can be queried for several sectors.

3D City models from around the world analysed

Five 3D city models were selected for analysis. These models were chosen based on various criteria, including different countries and dates, different owners and objectives underlying their creation and different techniques and technologies used.

3D model of the city of Hong Kong

The city of Hong Kong faces major road traffic problems. Its vehicle density for 2009 stood at approximately 283/km (Information Services Department, 2009). Home to many 40-60 floor residential buildings, it is the city with the highest population density in the world. Building facades are exposed to noise, and to attenuate this noise, the city used GIS to design a noise contour map for gathering noise related information and quantifying the noise scale, as well as assessing noise attenuation measures. The information presented in a 2D map was limited as it did not show the vertical variation of noise levels, which is why the city then proceeded to adopt an interactive 3D noise visualization model. The model was able to send noise results to users (professionals and the public) to allow a fuller understanding and improve the situation.

3D model of 11 cities in France

A project to acquire a realistic digital 3D model was kicked off in 2004 and lasted more than eight years. 3D models are loaded into a small radius, and to ensure a smooth operation, buildings far from the camera are shielded. This model is different from Google Earth models in its greater precision. The level of detail of the model is available as LOD1 and LOD2. The model has INMR been used in a variety of simulations. Following this experiment, the city decided to launch another more precise 3D model.

3D model of Chennai in India

In 2008, the city of Chennai was developing at a pace that far exceeded any temporal-spatial planning it had undertaken. Urban planners were under constant pressure. To meet the challenges they were facing, they used different modeling tools, including computer-assisted design and SIG. They created a model to help improve their decision-making. The model was generated from ArcMap to ArcScene, both
ESRI tools. 3D modeling aimed to measure the impact of urbanization on existing infrastructures, specifically the capacity of sewer systems to handle greater wastewater volumes, which should allow better planning.

3D model of London in England

A 3D model of a 25 km2 surface area of Central London was realized. The base 3D model was captured manually using stereophotogrammetry. The source photograph and associated data were obtained from the last high definition 12.5 GSD images collected in August 2016. The modeling of vertical infrastructures was accurate to 90 cm in all axes. The terrain in the base 3D model was not flat. It was captured manually using the same photogrammetry method as in the building and was accurate to 20 cm in all axes at the edge. The model was easy to use and update. The files were structured as 500 x 500 m (0.25 km2) OS mosaics, which made it easy to modify or replace them by zone without having to modify the entire model. The rationale for 3 D modeling was commercial. AccuCities, a private company, was the supplier of the data, which it models and sells to clients, who include planners, developers and architects.

In 2018, the Indian company, Rolta, based in Mumbai, and which has worked in Dubai and Oman, won the contract to develop the 3D model of the city of Abu Dhabi. It was a high-precision model, with photorealistic building facades. Unfortunately, the present research cannot provide additional details on the techniques and technologies used. Modeling was aimed mainly at sharing the internal database with other relevant government/municipal bodies. The model allowed the management of services and assisted in rapid urban planning. It facilitated emergency responses and improved public security.

“The idea of modeling the city of London by zone really is of immense help when it comes to allowing support for a greater data volume. It facilitates modifying and updating the model. Nevertheless, this idea must be extended if the model is used to analyze and simulate models outside the zone limits. AccuCities sells the city of London 3D model, and to meet their specific needs, clients can add to and improve on it. The ability to adapt the model to meet specific needs is also a very good idea. However, the notion of collecting data, and then modeling and selling the model, leads to questions regarding data ownership.”

While a model may carry out analyses with a specific objective, none of the 3D city models identified during the research was searchable over several sectors. Existing models do not produce a dashboard to help managers steer the city based on real-time performance indicators and a global vision. The structure of the 3D city model and technical choices depend on limited design objectives, and this structure then limits the model’s potential. Because the techniques used are limited to visualization and a few analyses, these models lack the capacity to interconnect all urban systems and perform several analyses (e.g. carbon emission levels, disaster management, etc.).